When you visit Shanghai sooner or later you think of Las Vegas. They have much in common. The pace of development is one thing. The scale of the construction projects is another. The audacity of the buildings is a third. The palpable sense of possibilities, of potential is another. Both cities share a desire to be bigger, faster, better. There’s a relentless reaching forward, a going beyond, an Icarus-like hubris to reach for the sky. And both cities play mind games with you. Distances are deceiving. You clearly see your destination on the near horizon, no more than 5 mins away by foot. 40 mins later, however,  you’re still walking, no closer to your goal. You can’t easily adapt to the topography in Shanghai and Las Vegas.

There are differences too. Las Vegas owns nothing to its past, existing only in the here and now. Old resorts are blown up to make way for new ones. Vegas makes no reference to history and heritage. Shanghai, on the other hand, is deeply rooted in the rich traditions of its millennia-old Chinese heritage and inextricably connected to its more recent 200 year old legacy as an international trading hub. Shanghai draws willingly from its own deep cultural well allowing its magical waters to merge with other streams much like the Huagpu river converges with the mighty Yangste to create the place of this great city’s birth.

There was a real convergence of cultures when  Connie Cheng, Vice Chairman at the Shanghai Municipal Tourism Administration, held a dinner for the MCI leadership who were  in Shanghai for the MCI Academy in early August.  Hosted, in line with local business protocols, at a private dining room in a historic hotel, this was an immensely convivial evening where our multi-national assembly ate non-sanitised, traditional Shanghaiese food with chop sticks, the Europeans unsure, from time to time, of what, precisely, we were eating. We also raised regular toasts to each other with surprisingly good Chinese red wine and celebrated the awarding to Shanghai of the 2013 Annual ICAA Congress. China in general and Shanghai in particular are profoundly committed to the international meetings industry and by 2013 all of the major industry associations – MPI, Site etc – will have held important events there. 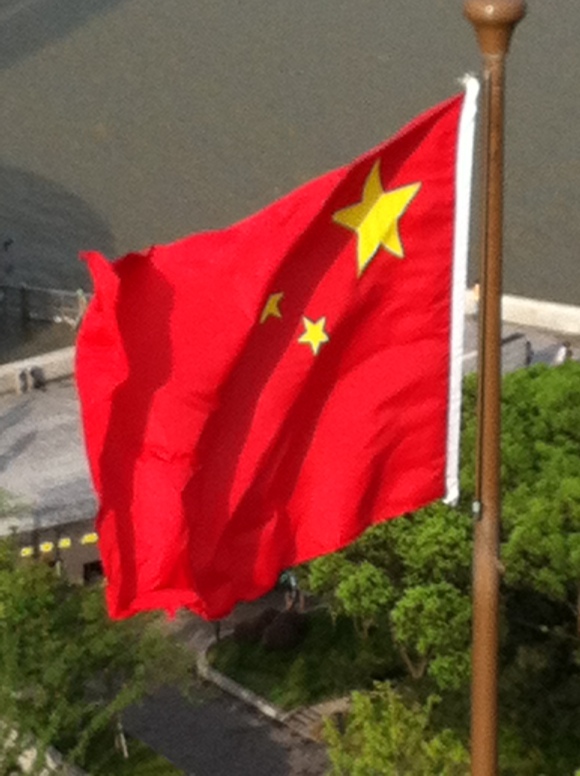 Of the various international hotel chains – they’re all in Shanghai – Marriott has established the widest brand profile with 23 properties in the city. Newest is the Marriott Shanghai City Centre, part of an inter-connected, multi-purpose development including office and retail. When  I visited the entire hotel had been taken over by ECCO (China) for the launch of their autumn /winter collection. This brand new hotel with 720 sleeping rooms was perfect for this big scale corporate event. The 7m ceiling height of the large ballroom (capacity of 550 on rounds of 10) allowed for a massive stage with giant screens and tiered seating either side of the impressive catwalk. Multiple projectors and  lighting rigs were flown from pre-installed fixture points ensuring a seamless production.

General Manager Meng Lo personally escorted me around the property. Guest rooms in bright vibrant colours start at 32sqm and include full sized bathrooms with glass partitions looking back on the sleeping quarters (the latest fad in guest room design?) All rooms are equipped with a “Jack Pack” allowing guests to use the over-sized LCD to review PPT presentations, play computer games or stream music and videos. WiFi is free here but only for members of the Marriott Rewards programme. Gold and Platinum members of Rewards have access to the Executive Lounge and suite guests, besides the extra space, also get Nespresso coffee machines as standard in their rooms. When I commented on the absence of any Irish whiskey in the bar at Inagiku,  the famous Japanese restaurant and one of the hotel’s 5 food and beverage outlets, Meng led me towards the spectacular winter garden with Harry Potter like floating candles where I was offered my choice of Jameson or Bushmills!

Fairmont on the Bund

In the 1840s, during the early years of the reign of Queen Victoria, Shanghai was the busiest port in the world with  the British, Americans and French all establishing trading presences along what we now call the Bund. They’re still there now operating luxury hotels from re-purposed or re-furbished buildings, the Bund still an important social and economic nexus in a burgeoning, rapidly expanding city. Variously known as Sassoon House and The Cathay Hotel, the Fairmont Peace Hotel is located, somewhat perfectly, on the intersection of Nanjing Road and The Bund. Following a 3 year refurbishment, the hotel re-opened in 2010 in time for Shanghai Expo under the management of Fairmont. Launched originally in 1929 when much of the world was in the grips of economic meltdown, this is a textbook Art Deco and has been lovingly restored as such.  A veteran 6 piece jazz band – average age 75 years – reinforces the 30s theme, providing live jazz in the bar until 2am each day. Essentially boutique in style, there are now 270 guest rooms  with the smallest room at almost 50sqm. The Fairmont Shanghai is a classic “incentive” property that straddles old and new, traditional and  contemporary, fusing historical authenticity with modern expectations. 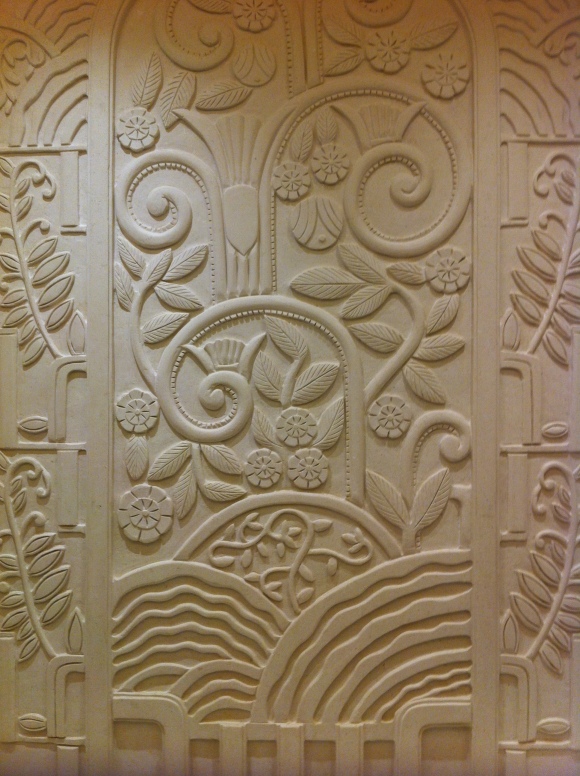 A short stroll further down the Bund will take you to The Peninsula, Shanghai. With roots way back in the 1800s and a world renowned flagship property in Hong Kong since 1928, there are still only 9 hotels in the group, the Peninsula Shanghai being the most recent (although The Peninsula Paris is due to open in 2013). This property combines deluxe-plus comfort and unrivalled service standards – there are 800 employees for 235 guest rooms – with super-advanced voice and data technology to raise the bar once again in terms of what defines a luxury guest experience.

Greeted by Flowers and Fanfares

Stunning over-sized florals and a live mini-orchestra greeted me as I entered the lobby during afternoon tea service at about 3pm. Gracie Shen, Director of Sales at The Peninsula, was waiting for me and patiently answered my “positioning” questions on the hotel. It competes with Ritz Carlton and Park Hyatt across the water in Pudong and with Fairmont and Waldorf Astoria on the Bund but has the biggest guest rooms at 58sqm and the best ADR in the city. It also has direct access to the adjacent ex-British Consulate venue and garden, giving it significant, highly desirable period function space. 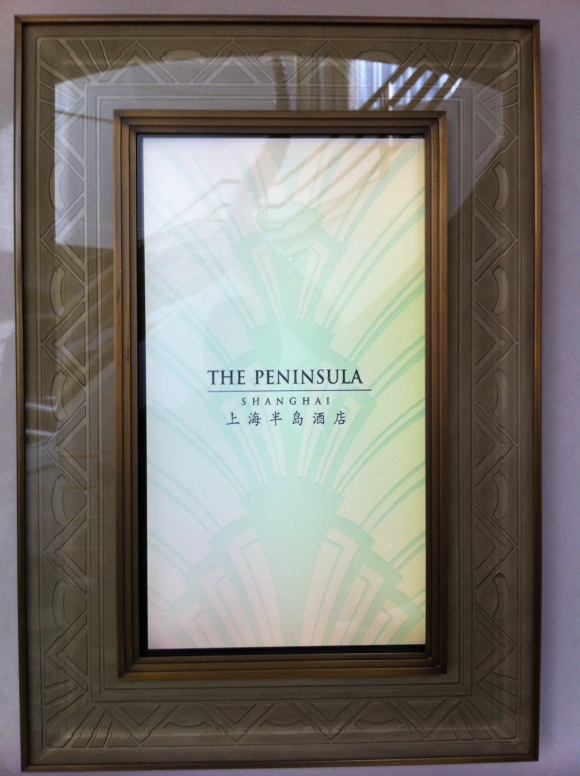 Built in homage both to Shanghai’s colonial and Chinese past  with simple Art Deco lines and lots of Feng Shui, the traditional feel of The Peninsula belies the technological infrastructure which drives all its processes from guest services to back-of-house. There are 12 different guestroom types, depending on orientation and view, but all rooms are “smart” providing instant connectivity to relevant staff and services and extraordinary integration with laptops, iphones etc. There are some genius intuitive touches, too, which show how well Peninsula knows its customers – the huge backlit numbers on guestroom doors require no optical aids or squinting; the valet box – place your dirty shirt here and it automatically informs the housekeeper – will remind every corporate executive of the magic basket into which you placed your soiled clothes as a kid only for them to re-appear next day freshly laundered in your closet; the spa setting in the bathroom which automatically changes the lighting, triggers the music and activates the “do not disturb” button!

To come: a week walking the Camino in Northern Spain and a fresh look at Copenhagen as as meetings and conventions destination.

Padraic Gilligan is VP of Industry Relations at MCI and VP of Ovation Global DMC, MCI’s destination services division. He can be contacted on [email protected] or on Twitter @Padraicino