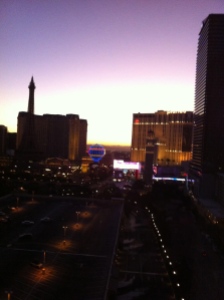 Another day, another dollar - Daybreak in Las Vegas

Early this morning as the intensity of the cleaning, power hosing and sweeping along Las Vegas Boulevard seemed to increase, I had a blinding insight. I figured out where it all comes from. This is not WASP / Calvinist earnestness and endeavour but rather Catholic guilt and a search for redemption. The Italo-Catholic origins of Sin City are not far from its surface as every morning the sins and excesses of the night before are washed away by the redemptive waters of the Hoover dam. So now!

The much anticipated IMEX America opened yesterday and it didn’t disappoint. We started the day at the Grand Lux Cafe in the Venetian with some of the leadership of our US partners, The DMC Network. Looking around the vastness of the venue, there were copious tete a tete’s in progress – others, like us, trying to build strategies around the volatile foundations of our current market.

There was a conspicuous lack of commonality regarding the present status of our industry and it seems to be both channel and destination related. New York and DC up, Vegas at par, others down and off pace. Most agreed, however, that budgets and attendee numbers were down even if the number of projects was up. Corporations were back in both the meetings and incentive business but not like 2005 while associations wanted more bang for their ever shrinking buck. Plus ca change …

Our pre-show stand briefing was an upbeat, colourful affair with Network lime green offsetting Ovation black to great aplomb. Security had difficulty restricting show floor access to exhibitors alone and once 10 o’clock came the floodgates open. Before 10:15 Hugo had picked up an amazing RFP for a 2000 person conference in Budapest. Happy days! 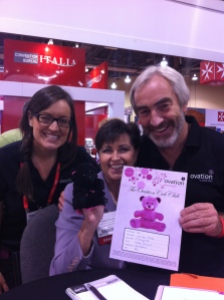 The day then was punctuated by a pretty constant flow of scheduled appointments, on- stand networking and, of course, unscheduled and sometimes unwelcome visits from “old friends”! The announcement of the winner of the Ovation Huggability Award brought a huge throng to booth 415 along with a 7 foot tall photographer who did his own thing as nobody felt like telling him what to do! 6 nominees – see ovationdmc.com for the finalists – received Huggability certificates before Samme Allen of The Barbican, London was announced as the 2011 winner. Within 15 mins Huggability nominee Joern Lucht of conworld.com helped us broadcast the news to the 40000 subscribers to his daily ezine.

Things relaxed from mid afternoon onwards leaving breathing space to catch up with friends on neighbouring stands. Unanimously, all reported a great day with most appointments fulfilled. And, of course, the unique “IMEX” touch was in strong evidence with the leadership team very visible around the show floor. Show owner Ray Bloom was even at the airport for a time on Monday monitoring the arrivals and meet&greet protocols.

I joined Darlene Catan and Marian Gardiner at Smith & Wollensky’s at 6pm for the Vegas edition of the IMN dinner, a popular fixture previously staged at the Chicago based Motivation Show. 40 colleagues, buyers and suppliers, from the finance and insurance sector gathered to socialise, catch up, tease and cajole and were treated to speeches and songs all orchestrated and ably conducted by Marian and Darlene. The droll, understated and ever-so -slightly pissed John Hehir of Dromoland Castle captured the evening’s zeitgeist with these inimitable words: “I’ve known Darlene a long time ever since she was a waitress in New York and I was a heavy drinker!” Sheer class. Maeve O’Connor and I then took everyone down memory lane with a passionate rendition of “Paper Roses” to rival the real version performed nightly by the real Donnie and Marie at the Flamingo.

Other invitations then beckoned and we departed into the balmy night air of Las Vegas boulevard where tiredness overtook me and I headed for the sanctuary of my room at the Bellagio to rest a little before doing it all over again tomorrow.