“Munich: a world of its own”

He wanted a regular soak in hot suds and, lacking the facilities under his own roof, His Majesty Ludwig I of Baveria decreed that a luxury guesthouse be built. Thus over 170 years ago the Bayerischer Hof opened its doors offering a warm weekly wash for His Majesty and initiating a tradition in hotel keeping and hospitality that today it describes as a “world of its own”.

This tagline can also be applied to the city which hosts the Bayerischer Hof. Munich is not just another post war German city with efficient infrastructure, bustling commerce and earnest inhabitants. This is Bavaria, not Germany. This is city of dukes and kings, of parks, pavilions and palaces. This is city of confidence and independence, of strength, security and self reliance. This is a city which presents meeting planners with an impressive stage upon which to enact stimulating, motivational and immensely creative live events. 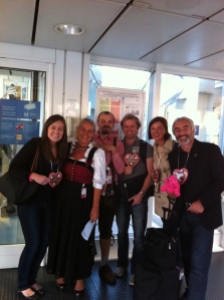 It was clear as soon as we got off the plane that this was a different place. Two broadly smiling faces, in lederhosen and plaid, greeted us on the air bridge and escorted us through customs, plying us with beer and bratwurst as we awaited other colleagues. Big respect and thanks to Sabine Ostermair and Dagmar Wüst of Munich Airport for setting up such an unusual and innovative traditional greeting for us.

The journey to our hotel, a fine Marriott in Nordfriedhof, took us past the newly constructed, stunning Allianz stadium which will host the Final of the Champions League in May 2012. The Marriott took great care of us over the 3 days of our sales summit, providing great support for a meeting that required multiple set ups and demanding, fast turnarounds. Patrick Fassbender, Director of Sales & Marketing, helped to set it all up and then Melanie Schilling, Director of Event Management, was an amazing on-site support working indefatigably with Erica and Sylvie to make it happen. We all appreciated the little touches like the welcome snacks and the chocolate presentation complete with logo and tagline – “Get Relevant!” Hans Umkehrer and Julius Förster of AV company, Modern Conference, ensured our presentations looked and sounded great!

A day’s intensive destination immersion at the end of the event left us wishing we had more time. Our morning coffee at the historical Cafe Tambosi cost about the same as Starbucks but definitely offered a more deeply satisfying value proposition. You sit around antique tables and order from an attractively bound menu that juxtaposes food and beverage choices with historical narrative and illustrations. It’s been in Odeonplatz since 1775. You wonder whether the Starbucks, recently opened right next door, will last that long?

Most visitors to Munich end up at some stage at Schloss Nymphenburg – the summer palace of the Bavarian ruling family. Designed originally by Agostino Barelli in the mid 17th century this is indeed an immense collection of period buildings, a true “synthesis of the arts” combining great architecture, amazing garden design and extensive water features. Naturally many of the rooms are available privately for evening events with the Hubertus Hall taking up to 220 for a banquet.

If Nymphenburg Palace is a high point in Munich’s architectural past, then surely BMW Welt is the apex of her architectural present. Located next to the Olympic Tower and Stadium built for the 1972 summer games, BMW Welt is a perfect example of how great brands live way beyond their core functionality and create a world of their own. Designed by Wolf Prix of Vienna based Coop Himmelblau – unanimous winners of the contest which BMW launched for its design – this is an extraordinary building, awesome and shocking like the work of Frank Gehry or Santiago Calatrava. Sheet metal and glass cover an immense footprint, allegedly the size of St Mark’s Square in Venice, providing multi- level areas connected by ramps and stairs where the BMW “world” narrates its unique story.

BMW Welt, along with the adjacent and equally magnificent BMW Museum, offers a wide gamut of customisable experiences perfect for incentive qualifiers. These experiences include “behind- the -scenes” visits to the manufacturing plant, private viewing at the museum and, of course, all manner of “hands-on”, driving experience.

The Mandarin Oriental is located close to the elegant Maximilianstrasse and, with 73 sleeping rooms, is a very appealing option for small meetings and incentives. A double height entrance lobby with orchid filled Chinese ceramics and a stunning Richard Long mural leads to a guest experience that is refined, discreet and reassuringly upscale. Standard rooms come at a minimum of 33 sqm and include bathrooms with separate shower, bath and WC. You won’t find ugly service trolleys in the beautiful corridors of the Mandarin Oriental as all service staff work from attractive, portable baskets.

The piece de resistance at the Mandarin Oriental is the rooftop terrace and pool. This area can be privatised and affords unique vistas of the old city and the majestic Alps to the South. Director of Sales, the lovely Prada-bespectacled Konstanze Ruf, petite and sophisticated just like her hotel, was a super, genial hostess.

The Bayerischer Hof is the Grand Dame of hospitality excellence in Munich and will inevitably feature in any shortlist of venues for meetings and events in the Bavarian capital. Anna Reitinger, previously of Grosvenor House, London showed us around and her enthusiasm for this marvellous hotel was infectious.

Laid out around 7 courtyards all 345 of the sleeping rooms here are accessed via light filled, wide corridors. There are multiple room categories and styles, as typical of a city centre period property, but the smallest room size is still over 30sqm. The meeting space at the Bayerischer Hof includes a suite of grand interconnecting salons, with separate entrance from outside, the largest of which has a triple ceiling height and magnificent balconies.

The adjacent Palais Montgelas, purchased from the City of Munich in the 1970s, dates from the early 19th century but resembles a Florentine Baroque Palazzo. It offers additional meeting space in a period setting complete with antique furniture sourced in Versailles. Worth a mention, finally, is Falks Bar, which combines original Stucco work with contemporary LED lighting. 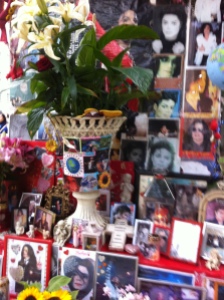 Directly outside the front entrance of the hotel is the bizarre “shrine” to Michael Jackson. Allegedly mistaking the Bayerischer Hof for the Aldon Hotel in Berlin, where Jackson infamously greeted fans while dangling one of his children over the balcony, fans of the deceased artist spontaneously created a memorial to him around an older monument to Franco-Flemish Renaissance composer Orlande de Lassus.

Having been impressed by Rocco Forte properties in Berlin, Prague and Italy we were anxious to view The Charles, Sir Rocco’s Munich property built on a green field site. If The Charles lacks the legacy and heritage of the Berlin or the Prague properties then this is more than compensated for by the intuitive, beautiful functionality of this new property. At 160 rooms, less boutiquey than other Forte properties, The Charles still bears all the fascinating and quirky hallmarks of Olga Polizzi, sister of Sir Rocco, and principal design consultant for the group. Dark timbers and muted fabrics combine with brightly coloured artwork from contemporary, Munich-based Humbertus von Hohenlohe to create sleeping rooms that lull you to relaxation then challenge you intellectually. The primacy of good design is in evidence throughout the building with architect, Christophe Sattler’s, triple step motif recurring on skirting, architraves and cornicing.

Perfect for small incentives, The Charles can also cater for meetings and events with 7 meeting rooms and a 5m high ballroom offering facilities for 200 guests, banquet style. The meetings facilities are accessible directly from the street and have been designed with car launches in mind. Nils König, Sales Executive, did a truly wonderful job at showcasing his property and providing us with a wonderfully comprehensive insight into how it could work for our meetings and events.

During our time in Munich we were privileged to be welcomed to the city by Ms. Gabriele Neff , “Stadträtin” or council woman, at the City of Munich. Speaking charmingly in English she conveyed that same Bavarian pride which characterized so many of our encounters with meetings industry personnel in the city. Combining so many key ingredients of a top meetings and events destination – history and heritage, art and design, real estate and infrastructure, easy access and great connections, scale and consequence, great people and positive attitude – Munich is undoubtedly in a world of its own.

Padraic attended the MCI Sales Summit in Munich in early September 2011. The event was graciously supported by Mr. Jörg Bauler, Director Conventions at the Munich Convention Bureau and we received great help in all our planning from our colleagues from the MCI Munich office: Frank Wimmer, Managing Director, Kinga M. Tahy, Account Director and Rosanna Kemenater, Project Manager